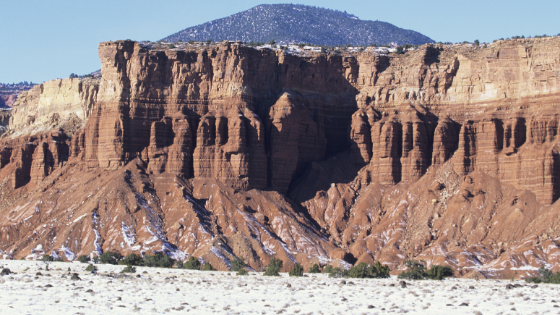 With the holidays officially over, most of the U.S. is settling in for a long, cold winter. But while frigid weather and endless snow may keep some of us holed up indoors, in Southern Utah, winter is a time for adventure and outdoor fun.

Keep reading to learn why winter might just be the best time to plan a visit to Capitol Reef National Park.

Every year, more than 1.1 million people visit Capitol Reef National Park. Unlike nearby Zion National Park, which has a smaller accessible area and more than 4 times the number of annual visitors, Capitol Reef rarely sees lines of traffic or crowds on most trails. But that doesn’t mean that on a warm summer day or a holiday weekend, you won’t struggle to find parking at popular trailheads or a picnic table when you want to have lunch.

Most of Capitol Reef’s visitors make their way to the park during the summer months, the park’s busiest season. Late spring and early fall see medium levels of visitation. Holidays outside of the summer, like Thanksgiving and Christmas, President’s Day Weekend, and Martin Luther King Jr. Day Weekend may also see spikes in visitor numbers, especially when the weather is fair.

But like most national parks and tourist destinations, Capitol Reef has an off-season. Starting at the beginning of November, the off-season sees a sharp drop-off in visitor numbers. While they may rise again around the holidays, they quickly subside at the start of January and stay that way except for a holiday weekend or two until at least March. If winter weather persists, crowds won’t begin to grow again until late April or early May.

This makes winter one of the best times to visit the park. If you’re longing to take pictures at popular overlooks without dodging crowds of tourists, or you want to enjoy the true tranquility of the park, you couldn’t ask for a better time to plan a trip.

Compared to national parks like the Great Smoky Mountains or northern parts of the country, Capitol Reef and Southern Utah in general experience fairly mild winters. January and December are the coldest months for Torrey, Utah. But the average daily high usually stays above freezing, at 41 degrees Fahrenheit. Nights get colder, with average daily lows reaching 20 degrees.

As for precipitation, heavy snow is rare in Capitol Reef. On average, the park receives about 3.8 inches of snow each January. This light snowfall isn’t enough to regularly block roads or keep you off of trails, which means that you can still enjoy all of the park’s features and trails during the coldest months of the year.

While most of Southern Utah enjoys mild winters, the occasional snowfall isn’t unheard of in Capitol Reef. But if you think that visiting the park when there’s snow on the ground is a mistake, think again.

Snow makes this already beautiful national park even more picture-perfect. Bright white snow contrasts sharply with the region’s red rock formations. You don’t have to be a professional photographer to capture some stunning photos when snow has fallen in the park. There isn’t a bad angle to be had in any of the thousands of acres.

Not only is the snow beautiful, but it also adds to the tranquility of the park. With fewer people enjoying Capitol Reef, the snow and empty trails makes for a serene, silent place to connect with nature and breath in that fresh, chilly air.

Activities You Can Only Enjoy During Winter

Even if there is light snow in the park or temperatures hover above freezing, with the right gear and preparation, you can still enjoy most of the same hiking trails and activities that you love in Capitol Reef during the summer all winter long.

But there are also plenty of activities that you can only enjoy in Southern Utah when temperatures drop. On nearby Boulder Mountain, ice fishing is a popular winter sport. You can also drive up on the mountain to enjoy the incredible views of the thick pine forests coated in soft white snow.

While Capitol Reef doesn’t get heavy snow often, the same can’t be said for some of the higher elevations in Southern Utah. Snowsports like downhill or cross country skiing are popular in several parts of the region.

Of course, back at Cougar Ridge, you can always warm up after a long day of winter fun with a dip in the hot tub or by cozying up beside the fire with friends and family.

Whether you want to enjoy some snowy fun or just want to have one of Capitol Reef’s trails to yourself, winter is a wonderful time to visit Southern Utah.

If you’re ready to start planning your off-season adventure, check out this list of winter activities to enjoy in the park next! 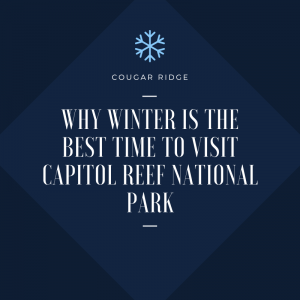