Posted at 19:22h in Our Blog, Uncategorized by admin 0 Comments

As kids, we were so gullible to the fibs Mom told us, like how to catch a bird, barehanded.  Later, it dawned on us that putting salt on a bird’s tail won’t actually make the bird submit tamely into our hands.  In fact, the humor of it is that if you can get that close to the bird, you can grab it! “Sneaky, Mother.” Perhaps Mother meant no harm when she made us believe in Santa Claus or that if we poked a finger into our belly button, our legs would fall off.  If your mom is like mine and loved the southwest, she even threw in some stretched truths about a ranch resort in the southwest.

To Mother’s credit, most of the lies were to fuel imagination, inspire, benefit, or protect us, somehow.  For example, scaring us into eating our vegetables was probably a good idea. Though following rules, working hard, and eating nutritiously certainly have their rewards, they will not make us astronauts or professional athletes.  Genetics, talent, and opportunity are huge factors. No matter how hard you practice, if you’re not skilled and athletic enough, you will not play for a major league baseball team, unless your mother owns the franchise.

Now, suppose you were born into a family of cowboys, and your mother was obsessed with the rugged outdoors of the Southwestern United States, especially with its many incredible national parks and ranch resorts near the parks.   With proud sincerity, she has often rehearsed the tale of how Butch Cassidy and the Sundance Kid stayed many times in lodges and cabins between Utah and Colorado, while planning their next heist.  She tells you that Cassidy and Sundance never left Utah without stopping to see her great grandfather, near Moab, and that Granddad journalized the visits and all the exploits of the two outlaws.

Mother’s favorite “yarn” was that Butch and Sundance buried thousands of dollars of gold near Capitol Reef National Park where a now-famous ranch resort in Torrey, Utah stands.  Allegedly, the gold had been aboard a Union Pacific train, headed to Ogden from Chicago, and it was meant to help the settlers build a strong area of commerce and provide the latest weapons to use against warring Indians and anti-Mormons.  Butch and Sundance deemed it necessary to aggressively claim the gold as theirs, and they later decided the gold should remain near the “golden” vistas of today’s Capitol Reef National Park. Its rustic, vast and multi-colored landscape seemed perfect for hiding the shiny booty.

Had the gold not been taken by Butch and Sundance, Utah today would probably have a different capital city: Ogden, instead of Salt Lake.  Generations of Ogden residents rue the day with commiseration that “their” gold was stolen and still curse the two outlaws who foiled the chance to be the State Capital and make Weber College the State’s flagship university.

What aren’t lies are the facts about one ranch resort in Utah.  Case in point, Torrey, Utah, the gateway to Capitol Reef, attracts tourists from around the globe to recreate, cogitate, and vegetate.  The finest of ranch resorts, Cougar Ridge is conveniently positioned there to provide a world-class experience.  The breathtaking sunsets and sunrises punctuate the unforgettable days of horse-back riding, hiking, motorcycle runs, hands-on private classes and workshops, bowling, guided adventures, sensational hunting and fishing, and indoor simulator system.  Built masterfully to fit the southwestern motif, it exudes cowboy class and luxury. Cougar Ridge is great for families, groups, and business people.

Perhaps the two best parts of staying at Cougar Ridge are the scenery both inside and outside the luxurious cabins.  Rustic and elegant, you won’t want to leave this fabulous ranch resort.  And that’s the truth. 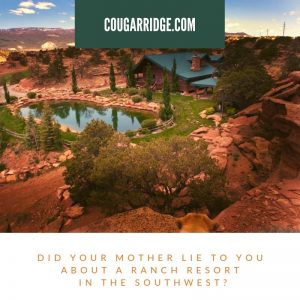