2020 is here, which means a whole new year of opportunities to visit Capitol Reef National Park. To celebrate the new year, we’re bringing you 20 facts about the park that you might not know. 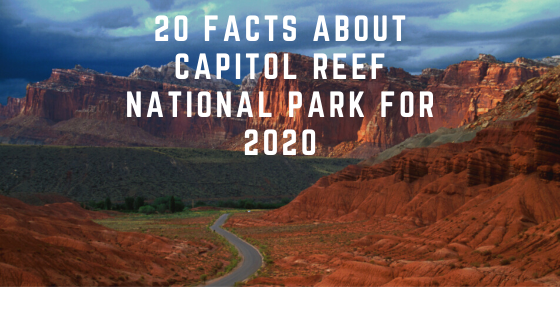 In the early 1900s, local businessmen organized a booster club to begin promoting the beautiful landscape around Torrey, Utah. In 1924, they hired a photographer from Salt Lake City, who came to the region and photographed what is now Capitol Reef. At the time, they called the area “Wayne’s Wonderland,” and using the photos, they began promoting the region and its natural beauty across the country

One of those businessmen, Ephraim Portman Pectol, was elected to the U.S. legislature. Almost immediately after his election, he contacted Franklin D. Roosevelt, and encouraged him to establish a national monument to protect “Wayne’s Wonderland.” President Roosevelt did just that, and in 1937, the name changed to Capitol Reef National Monument.

The “Capitol” in Capitol Reef National Park refers to the white dome formations in the park that resemble the dome on the American State Capitol Building in Washington, D.C.

4. “Reef” is a Reference to the Rocky, Coral-Like Landscape

What makes the landscape of Capitol Reef so unique is the presence of the Waterpocket Fold. This “wrinkle” in the landscape formed millions of years ago and caused the rocky landscape that inspired the “reef” part of the park’s name.

5. Capitol Reef Has Been a National Park Nearly 50 Years

Capitol Reef was designated a national park on December 18, 1971. This means that in December of 2021, the park will celebrate its 50th anniversary.

6. The Park is Home to a Natural Bridge

You’d expect to find a natural bridge (or more accurately, 2,000 of them) in Arches National Park. But did you know that there’s one right here in Capitol Reef, too?

Hickman Bridge is 125 feet tall at its highest points. The hike to this arch is one of the most popular in the park.

Visitors to Capitol Reef National Park may be surprised to learn just how big the park really is. That’s because you are only able to access a very small portion on paved roadways. But in total, it covers 241,904 acres.

8. More Than a Million People Visit Each Year

Not just more than million; for the past few years, more than 1.1 million people have visited Capitol Reef National Park each year.

Even more incredibly, just a decade ago, visitor numbers were less than half that number annually.

9. You Can View Petroglyphs in the Park

The Fremont Petroglyphs are one of the most popular destinations for visitors to Capitol Reef. They are over 1,000 years old and were left there by the Fremont people who once settled the region.

Over a thousand years after the Fremont People painted petroglyphs in the park, Mormon pioneers also left their mark. At the Pioneer Register, you can see where they carved their names into the sandstone rock.

11. More Than 70 Species of Mammals Call the Park Home

If you’ve ever taken a drive through Capitol Reef, you might be surprised to learn that there are 71 species of mammals living in the park. While some are common sights in the park, most hide during the heat of the day or are masters of disguise, which means that tourists rarely see them.

A few species of mammals you might catch sight of include mule deer and rock squirrels. Less common are mountain lions, bighorn sheep, and the gray fox.

12. Some Mammal Species are Incredibly Rare in the Desert

Thanks to the Fremont River, which flows through the park, you’ll find a few mammals here that are incredibly rare in the desert. One, in particular, is the American beaver.

13. More Than 220 Species of Birds Live in Capitol Reef

If you think that 71 species of mammals are impressive, you’ll be even more surprised to learn about the 239 species of birds you can find within Capitol Reef. From ravens to falcons to Golden Eagles, and smaller species like wrens and jays, birds can be found in every landscape and altitude in the park.

In 2015, Capitol Reef National Park was designated an International Dark Sky Park. This means that the park has taken measures to reduce light pollution and provide programs to inspire stargazing. You can stargaze on your own, or join one of the many public programs offered throughout the year.

15. The Park is Home to Orchards Where Visitors Can Pick Fruit

One unexpected feature that you wouldn’t expect to find in a national park is the Fruita Orchards. Planed by Mormon pioneers who settled in the region, these orchards are now open to the public. During harvest seasons, you can even pick and eat the fruit, and take some home with you for a small fee.

16. Kids Can Earn a Junior Ranger Badge for Free

Most national parks and monuments offer a popular Junior Ranger program. This program varies from one park to the next. For each, kids complete a variety of activities to help them learn about the park. After they’re done, they earn a Junior Ranger badge. These badges are specific to each park, making them a great item to collect and commemorate the parks you visit. Stop by Capitol Reef’s Visitor Center to pick up an activity book and start working on a Junior Ranger badge.

17. Horseback Riding is a Popular Way to Explore the Park

You’re unlikely to see a horse trotting through the busy Zion National Park. But in Capitol Reef, they’re not only welcomed but are a popular way to see the park.

18. Three Sections of the Park Can Be Explored By Vehicle

Scenic Drive is the most popular way to see the park. It begins at the Visitor Center and continues 2 miles past many major points of interest, before ending at Capitol Gorge.

Notom-Bullfrog Road follows the Eastern side of the Waterpocket Fold for 10 miles. After that, the road continues, but it is unpaved.

The final section of the park you can drive is Cathedral Road. This unpaved road isn’t heavily traveled because you’ll want a four-wheel-drive vehicle. But if you have one, you can enjoy the stunning sight of monoliths rising thousands of feet above the desert floor.

Head south from the park, and you’ll find Glen Canyon National Recreation Area adjacent to Capitol Reef. To the Southwest lies Grand-Staircase-Escalante National Monument. Both parks offer many of the same outdoor adventures as Capitol Reef, including hiking, off-roading, picnic spots, and more.

20 There’s Something for Everyone

National Parks are designed to allow everyone to enjoy our country’s incredible natural wonders. Capitol Reef is no different. Whether you love a rugged outdoor adventure or prefer gazing at the sights from the comfort of your car, Capitol Reef has something for you! Start planning your next visit today! 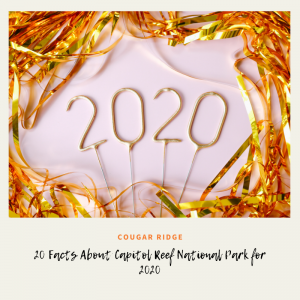