5 Things You Shouldn’t Do During a National Park Visit

Millions of Americans and visitors from other nations explore the more than 400 national parks spread across the U.S. each year. They come for an endless number of reasons and choose to explore the parks in a variety of unique ways.

But despite their popularity, these parks aren’t Disneyland. If you want to avoid a dangerous situation or harm to the park, you have a responsibility to follow a few spoken and unspoken rules.

No matter how you choose to explore the gems of Southern Utah or national parks anywhere else in the nation, there are a few rules and guidelines you should know to keep yourself and the park safe and make the most of your trip. Keep reading to learn more. 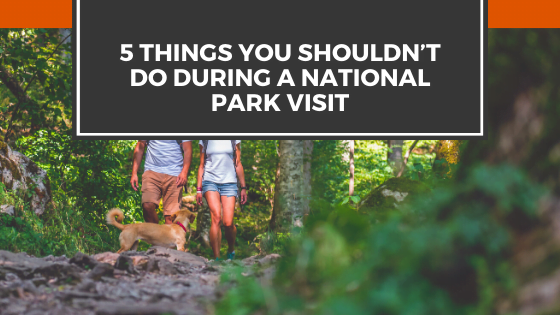 When you arrive at a national park, it can be tempting to rush straight to the trailhead and get started. But before you start the rest of your day, make a stop at the visitor center.

At your chosen park’s visitor center, you’ll find important information that could affect your visit. From flash flood warnings to trail closures, you may find out that you need to rethink which trails you’ll hit. Or you’ll know to be on the watch for signs of a storm that may require you to seek shelter. If you’re new to the park, it’s also a wonderful chance to learn about its history, popular features, or unique geology.

When there are hundreds or even thousands of visitors in a park on any given day, many of them on rugged, lengthy trails, rescues can be time-consuming, costly, and even dangerous. Doing your part to stay safe and only take on trails you can handle will help you avoid becoming another tourist in need of a risky rescue that could have been avoided.

National parks across the nation are sanctuaries for thousands of species of animals, reptiles, birds, and insects. In Capitol Reef National Park alone, there are 239 species of birds, 71 species of mammals, 15 species of reptiles, 5 species of amphibians, and 13 native species of fish, as well as a few non-native, invasive fish.

While spotting one or more of these species during your visit to the park is certain to be a lasting memory, it’s important that you follow a few easy rules. First, never approach wildlife of any kind. Even if they seem calm and harmless, a wild animal can be easily spooked or may carry diseases that can be transmitted to humans. Second, never feed wildlife, either from your hand or by leaving behind food waste. Human foods can be dangerous for animals, and regular feedings can lead to dependence, which will cause animals to lose their ability to forage for food for themselves.

Capitol Reef, like so many other national parks, has dealt with its share of graffiti in the past. Carved into rock faces, sprayed over signs, and more, graffiti of any kind leaves a terrible mark on the park.

In some cases, graffiti can be removed, though the removal is time-consuming, pain-staking, and expensive. In many instances, though, the graffiti can’t be entirely removed, or the removal leaves an irreparable mark on the land.

You probably realize that spray painting images or scratching your name into a rock is wrong (not to mention illegal!). But there are other forms of graffiti that visitors may not realize are destructive.

Constructing rock cairns, those precarious stacks of rocks that you may have spotted in national parks across the country, is a form of graffiti. By moving rocks, visitors disturb plant and animal life and leave the soil vulnerable to run-off. Stacked near the edge of cliffs, these rock stacks could also tumble and injure unsuspecting hikers far below.

There’s nothing better than enjoying the stunning views of your favorite park alongside a few of your friends. But the key there is just “a few.”

Many visitors to national parks don’t realize that it’s discouraged, or sometimes even against the rules, to hike in groups of 6 people or more. There are a number of reasons for this. To start, larger groups tend to be louder and more disruptive to other hikers. They take up a lot of room on narrow or crowded trails as well. If you’re traveling with a large group, it’s best to split up during hikes.

National parks may be excellent places for hiking and enjoying the outdoors, but they are also delicate landscapes. For that reason, pets aren’t allowed in most national parks, or in most areas of the national parks.  Your beloved dog might be a great hiker, but they will inadvertently disturb other wildlife and plant life.

In Capitol Reef National Park, for instance, pets are not allowed on any hiking trails, in public buildings, or in the backcountry. You can bring Fido along, just as long as he or she remains on a leash that’s 6 feet long or shorter, and you stay within 50 feet of center lined roads or in your vehicle. Pets are also allowed on a few short pathways around the campground, and in any unlocked orchards in the park.

A visit to any national park is a wonderful way to break free from your everyday life. Take to the trails, cruise stunning landscapes with the windows down, explore wild and untainted backcountry, or simply take a stroll down a nature trail.

But while the national park service does what it can to keep much of the parks as wild and natural as possible, they aren’t without rules. Whether it’s a rule to keep you safe or to protect the park and its animal, these rules aren’t something to be messed with. Follow them to keep yourself safe and protect the park for future generations. 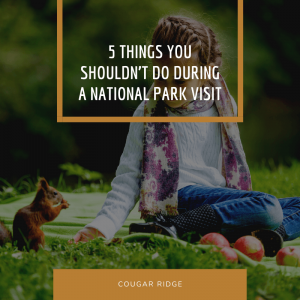