Capitol Reef National Park is a sometimes-overlooked Utah gem. With stunning red rock cliffs and lush orchards, the park is as beautiful as it is unique. But what many visitors don’t realize is that the park has a long history of failed settlements, exploration, and resilience. Keep reading for a brief history of this special national park. 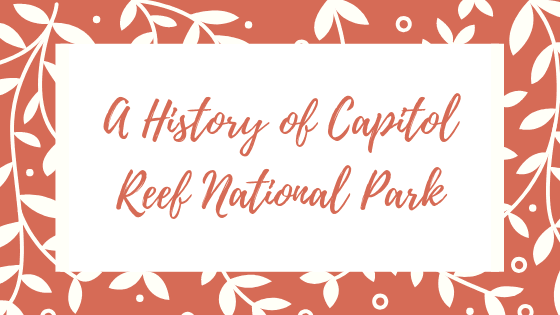 The earliest evidence of humans settling near what is now Capitol Reef National Park is of the Fremont People, a tribe of Native American hunters and farmers. This group settled in the fertile region and established crops of lentils, maize, and squash. They even built complicated irrigation systems and stone granaries for storing their crops. Artifacts left behind, including carvings on rocks and canyon walls, indicate that these relatives of Ancestral Puebloans lived in the area from around 700 AD until at least 1250. Severe drought is believed to have driven these tribes from the region at that time.

Around 1600, two other groups of Native Americans, the Southern Paiute and the Utes, established communities in the area, where they stayed until the 1800s when early settlers drove them away.

Early Exploration of the Region

While settlers lived in the area starting in the early 1800s, it would take until the 1870s for it to be officially explored and mapped. During that time, settlers moved into the high valleys of the region and established several towns that still exist today, including Torrey, Fremont, Loa, Lyman, and Bicknell.

In 1872, a surveyor under the U.S. Army’s John Wesley Powell expedition named Alan Thompson entered the region and explored it, marking the first official such expedition. Later, geologist Clarence Dutton would follow the same route, marking the first geological study of the region. Despite the ground-breaking nature of these expeditions, neither explored the Waterpocket Fold thoroughly.

In the 1880s, Mormon settlers made it to the Fremont River valley and established a town called Junction, which would later become Fruita. Two other towns were also established around this time, though both would eventually be abandoned because of flooding on the Fremont River. The town of Junction and its settlers relied on the fruit trees planted there, as well as mining of limestone and uranium later on, during the early 1900s.

Over the years, no more than 10 families would settle in Fruita at a time, with ownership of the orchards and residency in the town changing frequently before the entire settlement was later abandoned. Several structures and much of the fruit orchards are now preserved and maintained by the National Park Service.

It wasn’t long after the Fruita settlement was abandoned that local businessmen decided to try to preserve some of the area’s natural beauty. Ephraim Portman Pectol and his brother-in-law, Joseph Hickman, established the Wayne Wonderland Club in 1924. The organization was later changed to the Associated Civics Club of Southern Utah. Both organizations worked to get the area designated as a National Monument.

In 1937, that dream became a reality. President Franklin D. Roosevelt signed a proclamation that created the Capitol Reef National Monument, officially protecting 37,711 acres of the region. But the Great Depression dryed up National Park Service funds. It would take years before rangers were assigned to the park. Until that time, the monument was placed under the control of Zion National Park, some 200 miles away.

In 1968, President Lyndon B. Johnson adding 215,056 acres to the monument. By 1970, the property officially covered 254,251 acres. Because of the monument’s growth, those close to the property began to advocate for national park status. President Richard Nixon finally signed legislation that officially created Capitol Reef National Park on December 18, 1971.

Today, Capitol Reef National Park welcomes more than 1.1 million visitors a year. While it may not be the most visited national park in the nation, it remains a beloved gem. It’s close proximity to Zion, the fourth most-visited national park in the nation, makes it a popular side trip for those visiting that park, but it’s beautiful landscapes, crowd-free hiking trails, and unique attractions like the Fruita orchards make it well worth a trip all its own. 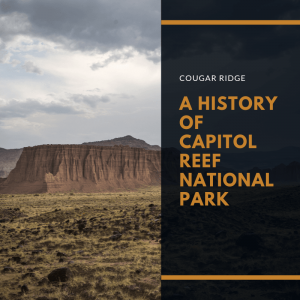