Did You Know You Can Go Apple Picking in Capitol Reef National Park?

Just about every national park in the country has something that makes it unique. Wading through the river running through The Narrows in Zion. Watching Old Faithful erupt in Yellowstone. Seeing lava spill into the ocean in Hawai’i Volcanoes National Park

And while it may not top the list of most-visited national parks in the country, Capitol Reef has something so unique, you won’t find it in any other park in the nation; apple picking. 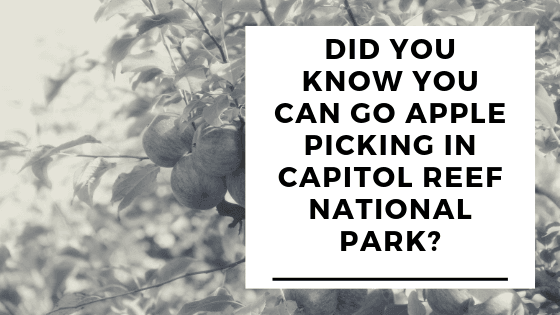 In 1880, Mormon settlers first established a pioneer community in Fruita, Utah. Over the years, no more than ten families lived in the small settlement at a time. The families planted orchards and sold the fruit, eventually planting several thousand trees over 200 acres of land.

Beginning in the 1960’s, the National Park Service began purchasing land from the owners. By 1969, Fruita and it’s orchards were added to the National Register of Historic Places, as the Fruita Rural Historic District. While most of the structures left behind by settlers and later, farmers, are gone, one property remains. The Gifford farmhouse has been renovated and refurnished. Today, it is a cultural demonstration sight where visitors can see how those early Mormon settlers lived.

Like the Gifford farmhouse, the Fruita orchards remain much the same as they were when farmers picked and sold their fruit. There are more than 3,000 fruit trees here. These include cherry, apricot, pear, peach, plum, apple, almond, mulberry, and walnut trees. Instead of farmers though, the National Park Service now maintains them. They continue to use historic irrigation techniques, as well as mowing, pruning, pest management, mapping, grafting, and more to keep the orchard alive and well.

You can stroll through any unlocked orchards year round. Exploring the rows and rows of trees is a stark contrast to the red rocks and stone cliffs of nearby Capitol Reef National Park.

While some of the orchards may be open year round for leisurely strolls, you can only pick the fruit off the trees during specific time periods. These time periods vary each year, depending on blooms and the weather. The harvest season for the various trees this year are:

Many visitors also flock to the orchards earlier in the season to catch the trees in bloom. The tree varieties flowered this year from:

When the orchards are unlocked, guests are welcome to sample ripe fruit, free of charge. This fruit must be eaten while in the orchard, and cannot be taken out. Once the harvest season has begun, there are specific rules for how visitors are allowed to pick the fruits. You must bring your own bags along to collect your harvest in. Ladders and hand-held fruit pickers are available. Children may use the ladders, but only if supervised. Climbing the fruit and nut trees is never, ever permitted. These trees are historic and delicate.

You should only pick ripe fruit, and park rangers will be happy to help you learn the difference. Once you’ve picked your fruit, you’ll need to pay for it at one of the self-pay stations. There you’ll also find signs letting you know the price for each type of fruit.

Capitol Reef maintains a hotline to let guests know when trees are flowering or what fruits are available for harvest at any time. To reach it, call the park’s information line, (435) 425-3791. After the introduction, you’ll need to press #1 to reach the visitor information line, then press #5 for the fruit hotline. The park also announces fruit blossom and harvest times and schedules on social media, on both their Facebook and Twitter feeds.

Planning a Visit to Capitol Reef During Harvest Season

It’s not too late to plan a visit to Capitol Reef and the Fruita orchards in time for harvest season. You can still pick apples until October 17, as long as there remains fruit on the trees. Pick fresh apples in the park by day, and then bake them alongside your outdoor BBQ back at Cougar Ridge, or make a stop early in the day and enjoy fresh apples on the trails during your hiking adventure! 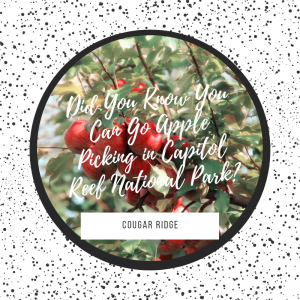