Bryce Canyon National Park has been known for its stargazing for over five decades now. Amateur stargazers and professionals alike have flocked to the park to take in the starry skies without the obstruction of nearby city lights. Now, the park is officially earning recognition for its dark skies.

What is an International Dark Sky Park?

The International Dark-Sky Association is an organization that was formed in 1988. Their goal is to protect the world’s night skies for future generations. They work with governments, park officials, city leaders, and more to advocate for measures to protect our night skies and keep them dark. They also educate the public on the importance of these measures and how they can do their part to chip in.

Why Do Our Night Skies Need Protection?

If you aren’t familiar with the International Dark-Sky Association and its efforts, you might be wondering why exactly our night skies need protection. The answer is light pollution.

Light pollution is caused by overuse of artificial light after the sun goes down. It comes in many, many forms. Cities, with their endless buildings, street lights, and other light sources, cause excessive light pollution. That’s why you’ll rarely see a sky full of stars when you’re near a city, and likely never see a single star when you’re in a large metropolis.

But light pollution isn’t a problem that is reserved for cities alone. If it were, places like Bryce Canyon or Capitol Reef wouldn’t need the efforts of organizations like the International Dark-Sky Association; their distance from any major cities would be enough. However, light pollution can be caused by any lights, even small numbers of them. Outdoor lighting directed toward the sky is always a source of light pollution. In our national parks, street lights and security or landscape lighting around visitors centers, ranger stations, campgrounds, and other locations in the parks all contribute to light pollution and affect our ability to see the night sky in all of its glory.

It isn’t just stargazers that want to keep the skies dark. Dark night skies are also important to our wildlife. Artificial light can harm the sleep and wake cycles of nocturnal creatures. It can affect their ability to track prey, and otherwise affect their survival rate. Sea turtles hatchlings navigate towards artificial light instead of the ocean after hatching. Birds crash into skyscrapers because of confusion caused by artificial lights. Bats have difficult tracking prey, while frogs have difficulty mating in captivity, likely because of the presence of lights in their enclosures.

Plantlife has been proven to suffer as well. In one study, trees were shown to adjust to seasonal variations faster than they should have as a result of exposure to artificial light.

There is also evidence that light pollution and the destruction of our dark skies could be affecting human populations’ health as well. Artificial lights affect our bodies’ circadian cycle, which is what allows us to sleep at night and stay awake during the day. In turn, we lose sleep, which can have detrimental effects on our health and wellness.

What the Dark Sky Designation Means in Bryce Canyon

In order to earn its spot on the list of International Dark Sky Parks, officials at Bryce Canyon National Park have taken measures to reduce light pollution. This includes getting rid of unnecessary artificial light during the nighttime hours. Lights that do need to be left on have been switched to special light bulbs. Enclosures that help direct the shine downward, instead of towards the sky, are also used.

The park has also long hosted educational programs. This helps teach the public about astronomy and the effects of light pollution. These efforts will no doubt continue now that Bryce is being officially recognized as a great spot to take in the night sky.

One event in particular that draws astronomers and amateur stargazers alike is the annual Bryce Canyon Astronomy Festival. Every summer, visitors can enjoy several days of astronomy-themed activities and programming, both during the day and after dark.

Other Utah National Parks on the International Dark-Sky Association List

Bryce Canyon National Park isn’t the first national park to earn recognition from the International Dark-Sky Association. In fact, it isn’t even the first of Utah’s Mighty 5. Arches, Canyonlands, and Capitol Reef have all already been recognized. All three parks take measures to reduce light pollution. They also host plenty of events and programs of their own.

Stargazing is one of the coolest and most unique activities you can enjoy during your visit to Utah’s Mighty 5. Even Zion, the only park to not on the International Dark-Sky Association’s list, offers stellar stargazing. Whether you attend one of the parks’ programs or just drive into the park at night with your family, stargazing in a national park is an activity that your family can enjoy together. And its a memory you’ll no doubt treasure for years to come.

For some other unique activities to add to your next Utah adventure, check out this list next! 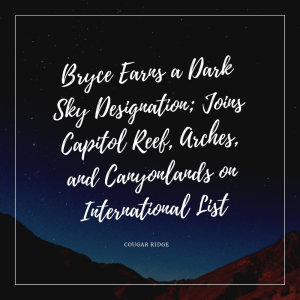