Does Father know best, or is Mom always right?  Hmm. Do I have to choose one? Dad prefers to rough-it without paying the small fee to enter a national park, and he still swears that Capitol Reef National Park is in Colorado; but when it comes to hitting the national parks, Mom was definitely right.  She taught me well, that it is, in fact, in Utah and life’s too short not to experience a national park, especially Capitol Reef.  Here’s why she was right.

I had limited my recreation to swimming laps at the community pool (though the water was kept at a toasty 89 degrees for the older folks who would complain if they had to bounce their water aerobics in the cooler waters set for lap swimming at 83 degrees.  Spineless pool boy. I think he took “Respect your elders” a bit too far.) Swimming, eating, working, and enjoying time at home with the family seemed enough for me until Mom convinced me to take a week off work to visit one or two of Utah’s national parks.

We wanted to find good lodging near Capitol Reef National Park.  There were a few options, but one really stood out.  It met our needs for the independence of having a kitchen to cook whatever we wanted and provided cool amenities for activities outdoors.  Cougar Ridge Resort had it all. Competitively priced for vacation rentals and classy as can be, Cougar Ridge was much more than fine lodging.  It is sequestered among grandeur, quiet and glorious. We were treated like VIPs, and the casitas were very nice. Once settled in the condo, I stepped out to the massive deck and gazed at the vast and colorful scenery of the high desert with its amazing geology of rust-colored sandstone cliffs, canyons, buttes, and trees and flowers of greens, yellows, purples, and pinks.  It was a first for me, and it gave me goosebumps.

After a drive of less than an hour, we found ourselves at Capitol Reef.  Park rangers and guides answered questions about the national park’s history, geology, and popular hiking trails.  Mom and I compromised about the intensity of the hikes, deciding if I went with her on a short, easy one, she would tackle a more rigorous one.  At the high point of one trail, Mom and I stood in awe at the vista of magnificent mountains, valleys, and colors. We even saw some mountain sheep in the distance.

I was glad to have my camera with me because while taking a photo of the sheep, a mountain lion bounded toward them, scaring the sheep into a dead run.  The cougar is a little blurred in the picture, but it still looks cool! “This is much better than swimming laps in hot water,” I thought.

Franklin Delano Roosevelt proclaimed Capitol Reef a national monument in 1937, and Capitol Reef achieved national park status in 1971.  The park is famous for the spectacular geology of its 100-mile Waterpocket Fold, a giant wrinkle in the earth’s crust, studied by curious and giddy geologists for many years.  The Fold stretches from Thousand Lake Mountain down to Lake Powell. By plate stressors and geodynamics, rocks have been pushed up, and erosion has shaped rock layers, creating other-planetary rock features and deep canyons.  Crossings are treacherous, so Hwy 24 is the only paved road to cross the Fold.

On our “moon-walk” near the Fold, we stopped for a snack.  The Gatorade and water tasted fantastic, and the trail mix provided the energy to resume the trek.  While sitting, Mom told me things I’d never heard—stories of her childhood, heartbreaks, and joys, which meant a lot to me.  I mused, “If it takes a national park to bring this out of her, it’s well worth it!”

Sure, the sights, sounds, and exercise of Southeastern Utah were exhilarating, but the talks with Mom made the trip more valuable than anything we did at home.  National Parks might just be the right ticket for you, too. 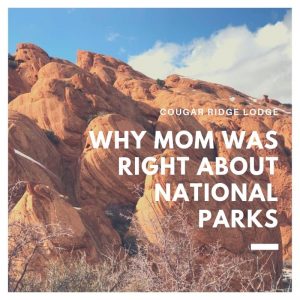