Look, Dad!  There’s a dead skunk on the road!  We’ve all seen the sad sight of animal carcasses on the roads.  They range from tiny chipmunks to deer and cattle, making millions of hazardous obstacles for drivers on America’s roadways annually.  National park road kill, in turn, causes more accidents by compelling people to swerve to avoid them. States have argued about how to solve the problem, or at least how to minimize the risks.  This article presents the truth about national park road kill.

The Dangers Of Road Kill

The commonest critters killed by vehicles in national parks are understandably the small or slow ones:  lizards, squirrels, possums, skunk. What’s scary are the deer.  Over a million deer are struck by vehicles in the USA each year, and they’re big enough to damage your car and injure or kill you as well.  If one is thrown into your windshield, well, I don’t have to explain what might happen.

Unfortunately, some people go beyond checking to see if an animal is dead or alive.  They’ll try to pick it up, which sometimes provokes the hurt and angry critter’s teeth into your arm.  This means a trip to the ER with the hope that rabies or another infection is not an issue.

Imagine driving around a curve to suddenly see a family of vultures tearing up a carcass for dinner in the middle of the road.  In the panic to swerve, people frequently lose control, hit the soft shoulder, and are pulled off the road to a violent collision. At times, it takes superhuman reaction time and Nascar skills to safely negotiate the crisis and avoid killing the vultures or injuring the passengers in the car.  Even dragging a dead animal off the road is ominous because it can attract carnivorous animals to a place not safe (roadside) for them or for people. For these reasons, it’s better to take the animal home for food.

One of the ways the states have sought to mitigate the problems of road kill is to legalize eating it.  The thinking is that if it’s legal to eat roadkill, then more people would clear the roads of the hazardous carcasses and take them home or to the butcher for freezing and meal preparation.  Roadkill deer pack a lot of meat, which is good eating unless a day or two of heat have spoiled it. Cold temperatures provide the advantage of meat lasting longer. Some states, like California, are issuing permits to people who pay a fee for the right to remove road kill.  Others, like Alabama and Montana simply made it legal to take it and eat it. State Farm Insurance tracks statistics of deer hit by cars. It states that 1.2 million deer are struck each year. If just one-third of them were harvested for the venison, it would provide 20 million pounds of meat!

Besides the many benefits of our national parks, one advantage is that they are well governed and supervised.  It doesn’t take long for road kill to be seen and cleared from the national park roads.  This means that if you see it before the rangers get it, it’s likely quite fresh and good eating.  The meat of larger animals stays edible much longer than that of smaller animals, so if it’s a deer, you’re in luck.  And, keep in mind the weather. Road kill stays fresh much longer in cold temperatures than in the heat, so January road kill in a cold national park is your best bet for salvaging some good food.

Road kill Is the Most Ethical Meat

Considering the passion of vegetarians against breeding and butchering animals for food, it’s not hard to see that road kill is a more acceptable source of protein.  It’s natural and accidental, so eating it is preferable to store-bought and certainly to wasting it. 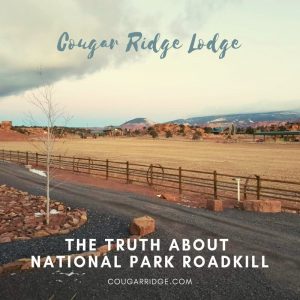