A vacation to Capitol Reef National Park should be on everyone’s bucket list, mainly because of the magnificent Waterpocket Fold.  It is the “feature attraction” to Capitol Reef’s real-life movie of other-worldly formations and vistas.

Franklin Delano Roosevelt proclaimed Capitol Reef a national monument in 1937, and Capitol Reef achieved national park status in 1971.  The park is famous for the spectacular geology of its 100-mile Waterpocket Fold (and you thought your face had wrinkles!), a giant wrinkle in the earth’s crust, studied by curiously giddy geologists for many years.

The Waterpocket Fold is the prominent feature that attracts tourists and geologists to Capitol Reef.  It is a wrinkle or buckle in earth’s crust, stretching from Thousand Lake Mountain down to Lake Powell.  By plate stressors and geodynamics, rocks have been pushed up, and erosion has shaped rock layers, creating other-planetary rock features and deep canyons.  Crossings are treacherous, so Hwy 24 is the only paved road to cross the Fold.

Other Cool Features Of Capital Reef

Running parallel to the Waterpocket Fold is the Notom-Bullfrog Road.  It gives access to the southern parts of Capitol Reef Park. There are many trailheads and gorgeous vistas from the Notom-Bullfrog Road.  For a breath-taking backdrop, you can take the Burr Trail, which cuts across the Fold. Stunning photography is had from Burr Trail to the Henry Mountains and the Waterpocket Fold.  Wet weather normally requires the best of four-wheel-drive vehicles.

Hiking and horseback riding are popular from Burr Trail, where you’ll see natural bridges, sandstone arches, and other majestic formations.

From the Notom-Bullfrog Road are some significant places, such as Burro Wash, Sheets Gulch slot canyons, and Cottonwood Wash.  These canyons are clustered together, making the area a popular spot for hikers. Be prepared to wade or swim through pools of water at bottom of the slot canyons.  The road crosses some points of the canyons.

Lower Muley Twist Canyon is well-loved by hikers for its narrow, deep, contorted canyon with large alcoves.  The trailhead is found at top of the Burr Trail switchbacks.

Upper Muley Twist Canyon displays dramatic views of the Waterpocket Fold.  Here is where you can see and photograph rock that has been eroded into strange formations, like huge arches.

Along the Notom-Bullfrog Road, there are five camping sites, free to the public and open to first come, first served.  Facilities include grills, pit toilets, and picnic tables. Bring your own wood or heat source because harvesting park wood is prohibited.  No free water is available.

The post-hike takes you up to Halls Creek, where you can trek about 12 miles round trip to catch the Hamburger Rocks formation, which is off the edge of the Waterpocket Fold.  No water available here. 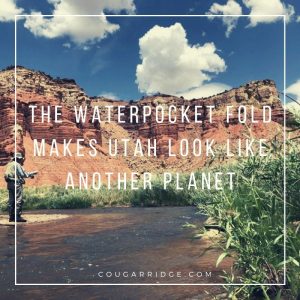